Its been a couple of weeks since my last blog covering Montgomery Texas. I still have more historical markers to cover there but decided to go off track a bit and take a little road trip to the Hill Country. I love taking these back roads. This is what Texas is all about. So the first Historical Marker I stopped at is located at 412 Luckenbach Town Loop. It feels like the middle of nowhere.

What is so special about Luckenbach Texas?  If I wouldn’t have been looking for it, I wouldn’t have know it was even there. When I got to Luckenbach, the first thing I was thinking is, is this really it? I must be missing something. Once I settled in and started looking around, I can now say it was one of the best places I have visited so far. I want to go back again real soon.

So when you drive up, here’s what you’ll see.  Like I mentioned, if your not looking for Luckenbach, you’ll drive right past it.

Even though the town is small, there is so much history here. The site was settled in the late 1840s and early 1850s by German farmers, among them the brothers Jacob Luckenbach and August Luckenbach

Hondo hangs out in front of the Post Office. The first post office opened in 1854 under the name of South Grape Creek. It closed in the later 1800s and then reopened in 1886.  August Engel served as postmaster and renamed the town Luckenbach. In 1971 Benno Engel sold Luckenbach to Mr. “Hondo” Crouch. 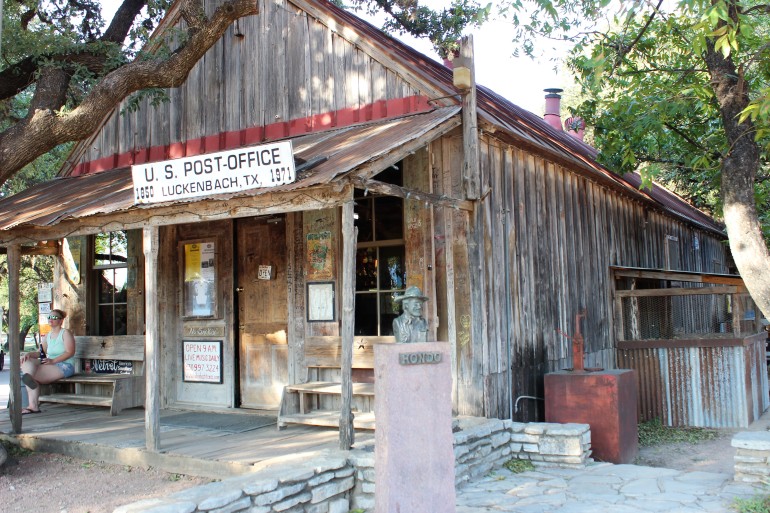 Luckenbach where “Everybody is Somebody”, achieved legendary proportions in 1977, the year after Hondo’s death, when the Waylon Jennings hit song “Luckenbach, Texas (Back to the Basics of Love)” became a national favorite.

There are still a couple of more historical markers here but I did not search for them. Gives me an excuse to come back 🙂 and I can’t wait. 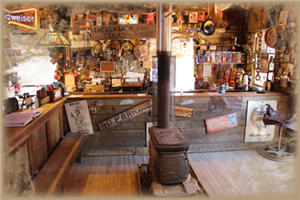 So the first thing I did when I arrived to Luckenbach was bought a beer. I think everyone does the same thing. Once you get your cold beverage you head outside to a picnic  table. The weather was hot but it felt great under all those shady trees. It kinda felt like hanging out in the back yard with family and friends.

Great seating areas all over. I bet this is really nice at night while listening to live music 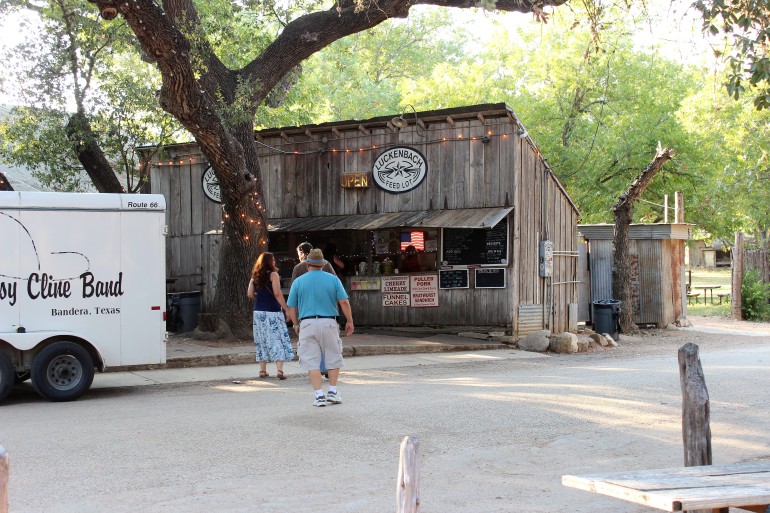 Outdoor Stage for some Live Music 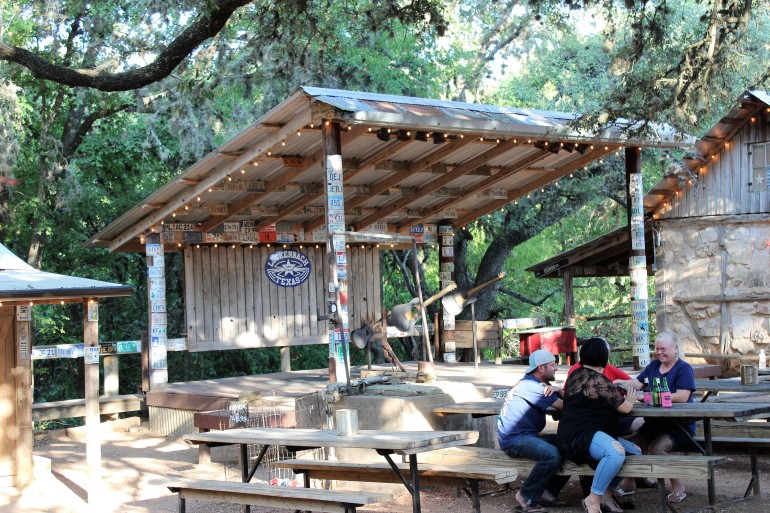 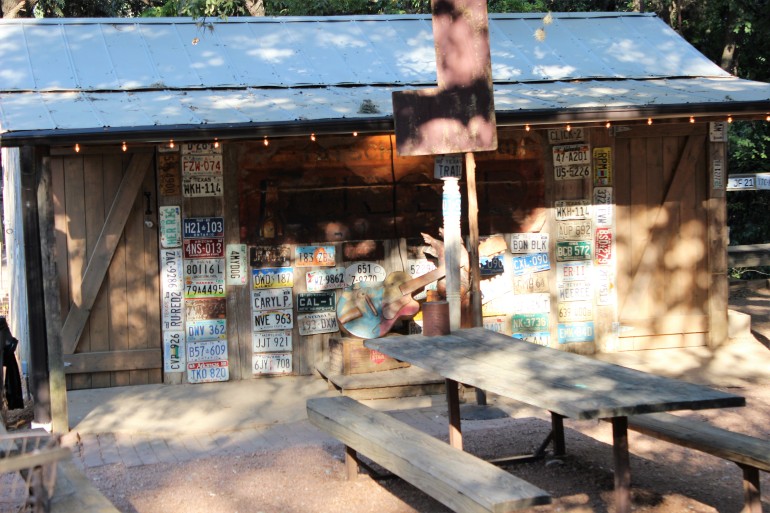 Overall this was a great stop. They even have a website that shows their Luckenbach Upcoming Events .They seem to have something going on everyday of the month. 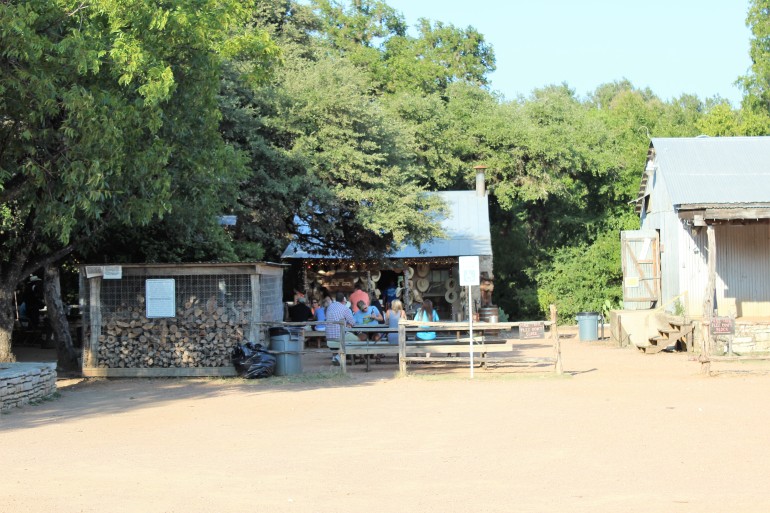 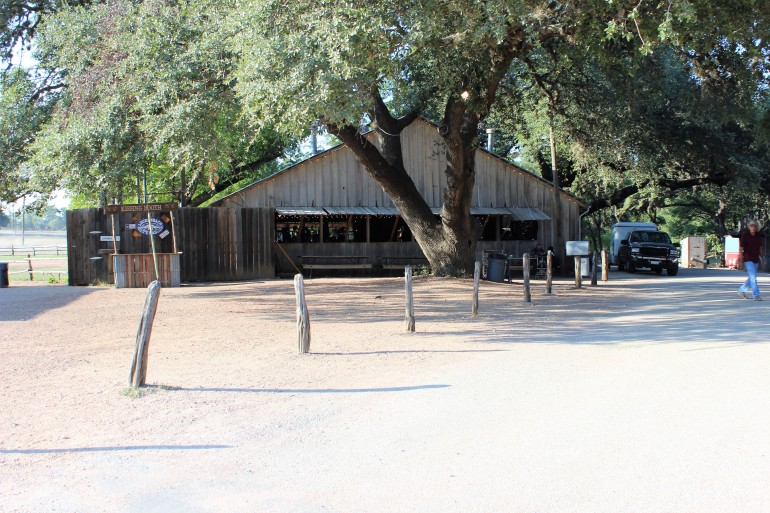 On my way out of Luckenbach I stopped at the entrance/exit and notice a small cemetery. Only 4 grave markers. I was curious. Who were these people?

After some research I found out that the cemetery is called the Schumann Cemetery.  The tiny family burial ground consists of four stones. Henrietta and Wilhelm Schumann,  German immigrant pioneers of early Republic of Texas, are encircled by the decorative iron fence. One of the grave markers had coins at the base of it. Not sure why. Maybe someone out there can give me some info on why people would put money at the grave site.?

Members of the Luckenbach family and other German immigrants moved here from Fredericksburg (11 mi. NW) in the 1850s. They settled along Grape Creek and soon established a school for their children. the Grape Creek Post Office was in operation briefly after 1858 with William Luckenbach as first postmaster. Later settlers included August Engel, who served as first postmaster when the post office was reestablished here in 1886 under the name of Luckenbach. John Russell “Hondo” Crouch and others bought the town center in 1970 and promoted its rustic atmosphere. Texas Sesquicentennial 1836 – 1986