HAPPY BIRTHDAY TO OUR TEXAS FLAG!

Who designed the Texas Flag? This question that has been debated for years. If you say anyone other than Charles B. Stewart (while in Montgomery County), your fixing to get an ear full. Descendants of Dr. Stewart and Montgomery County feel very strongly that the Lone Star Flag was designed by none other than Charles B. Stewart.

While visiting Town of Montgomery you will come across several historical markers for Dr. Stewart.

The 1936 Centennial Marker is located on FM 105 at FM 2854 in Montgomery. It is easy to find but there is really no where to pull over on the side of the road to really take a look at it.

Charles Stewart, was born in Charleston, South Carolina, on February 6, 1806, to Charles and Adrianna (Bull) Stewart. He moved to Texas in the spring of 1830 and operated an apothecary shop in Brazoria.

He moved to Montgomery in 1837, established a medical practice, and opened a drugstore. In 1839 he served on the committee appointed by the Third Congress of the republic to design a new state flag.

Dr. Charles Stewart was the signer of the Texas Declaration of Independence. 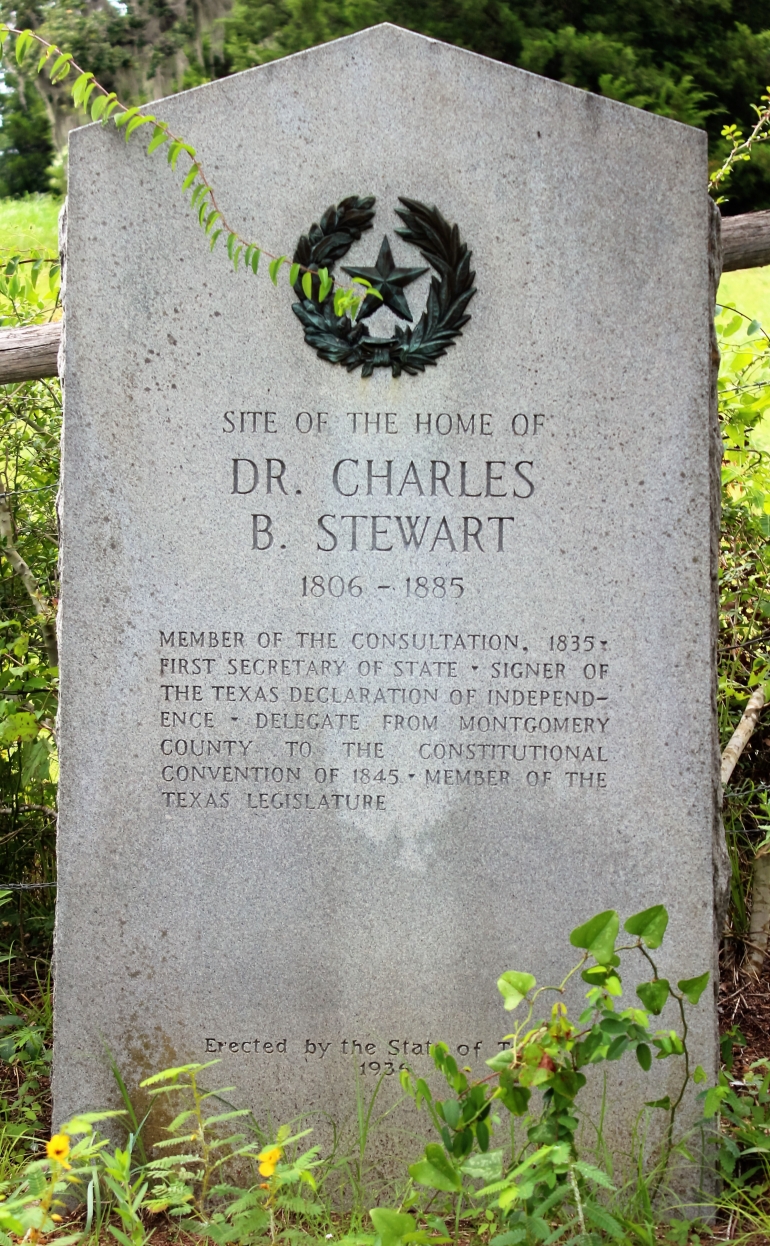 The Centennial Marker is displayed at the site of Dr Stewart’s Home.

Another monument is at the the City of Conroe Park

The actual Historical Marker is located at the Community Center near downtown, where you will find another 1936 Centennial Marker of the Town of Montgomery.

First Secretary of State in Texas (1806-1885). Came to Texas 1830. Secretary of State, Nov. 1835-Feb. 1836. Signed Declaration of Independence; helped to write Constitution of the Republic in 1836 and the State in 1845; served Montgomery County as District Attorney and three terms as State Representative. Highest appointed official in Texas, keeper of the state seal, the Secretary of State is named by the Governor with advice and consent of the Senate. This office has attracted leaders. Stephen F. Austin, “Father of Texas,” held the post in 1836. Secretary Ebenezer Allen in 1845 represented the Republic in annexation, reserving for Texas her public lands– a prerogative allowed to no other state. The Secretary of State grants charters; attests the commissions and proclamations of the Governor; assists the Governor in extradition proceedings; registers appointments of the Governor to the many state boards; administers the uniform commercial code of Texas; appoints notaries; publishes the laws of Texas; administers election laws; issues ballots; canvasses returns; files reports of state agencies. Since Stewart, 83 other men and two women have served Texas as Secretary of State.