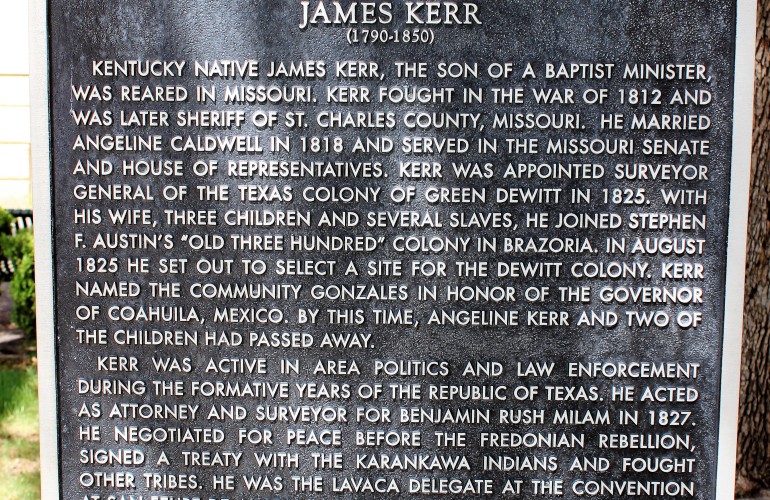 This Historical Marker is located at 700 Main Street. It sits next to the Early Settlers of Kerr County Historical Marker and the 1936 Centennial Marker in front of the Courthouse. James Kerr was born near Danville, Kentucky, on September 24, 1790. Kerr was ranked lieutenant during the time he fought in the War of 1812. After the war he became sheriff of St. Charles County, Missouri. In 1825 he was appointed as surveyor of the Texas Colony of Green De Witt. Later that year he would join the Colony of his close friend Stephan F. Austin.

In 1927 he acted as attorney and surveyor for Benjamin Milan. In 1827 he signed the Treaty with KaranKawan Indians. 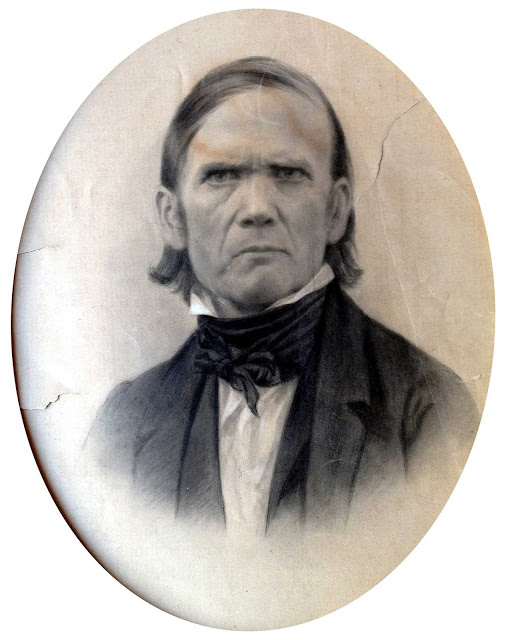 I thought it was funny to learn that he was not a great looking guy.  As a matter of fact people that knew him said he was not much for looks. One day while visiting a saloon, a stranger approached him and told him we was going to have to kill him. Kerr calmly asked the man why such drastic action was necessary. The stranger replied, “I have always said if I ever saw a man uglier than I am, that I was going to shoot him”. After getting a good look at the stranger, Kerr told the man to shoot away because the stranger was indeed ugly. Funny

Kerr spent his last years practicing medicine. On December 25, 1850, he died in his Jackson County home. In 1856 Kerr County was named in his honor.

Kentucky native James Kerr, the son of a Baptist minister, was reared in Missouri. Kerr fought in the War of 1812 and was later sheriff of St. Charles County, Missouri. He married Angeline Caldwell in 1818 and served in the Missouri Senate and House of Representatives. Kerr was appointed Surveyor General of the Texas colony of Green DeWitt in 1825. With his wife, three children and several slaves, he joined Stephen F. Austin’s “Old Three Hundred” colony in Brazoria. In August 1825 he set out to select a site for the DeWitt colony. Kerr named the community Gonzales in honor of the governor of Coahuila, Mexico. By this time, Angeline Kerr and two of the children had passed away.

Kerr was active in area politics and law enforcement during the formative years of the Republic of Texas. He acted as attorney and surveyor for Benjamin Rush Milam in 1827. He negotiated for peace before the Fredonian Rebellion, signed a treaty with the Karankawa Indians and fought other tribes. He was the Lavaca delegate at the Convention at San Felipe de Austin in 1832 and served as a member of the Second and Third Conventions. Two years later, he married Sarah Fulton. He became a major in the Texas Rangers in 1835 and in the Republic of Texas army in 1836. He was elected to the Third Texas Congress in 1838.

Kerr’s later years were spent practicing medicine in Jackson County. In 1856, pioneer Joshua Brown gave the land around this site in order that Kerr County be named for his longtime friend, Texas frontiersman and patriot James Kerr.